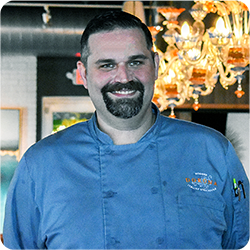 Starting professionally in the restaurant business at only 14 years old, Chef Lucas Bowen quickly worked his way up from cleaning to prepping and working the line, in less than a year, and never looked back.

Chef Lucas’ love for sustainable food was sparked way before it became a trend. Early on in his career, the young chef experienced the farm and sea-to-table concept at different restaurants on Martha’s Vineyard. Whenever possible, they would use local produce as an integral part of their menu.

Over the years, Chef Lucas worked his way up the ladder, eventually holding the reigns at Oyster Bar and Grill, Lamberts Cove Inn, and Tea Lane Catering Company. He then followed his heart (and future wife) to NYC.  Joining worldwide corporate giant Le Pain Quotidien, he started managing one location, but quickly progressed to New Store Coordinator, where he helped his company grow from five locations to over 30, in NYC alone.

After some seasonal stints to Naples, he and his wife decided to permanently settle down here.  In November 2019, he took over the role as Executive Chef at Dorona, where he continues to work with ingredients from sustainable sources.