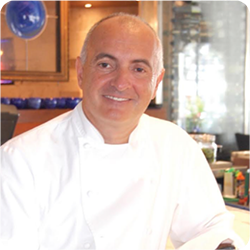 Born and bred in Venice, Italy, Chef Fabrizio Aielli nurtured a fascination for cooking at his mother’s stove.  After working in Venice, he moved away to gain experience in some of the best restaurants and hotels around the world.  He eventually returned home to become Executive Chef of the renowned Taverna la Fenice, next to Venice’s Opera House. His years of practice included fine restaurants in Italy, the Caribbean, and Washington, DC.

In 1995, Chef Aielli and his wife, Ingrid, opened the first of their restaurants, Goldoni, followed by Osteria Goldoni in 1998, and finally Teatro Goldoni, in 1999. The latter was acclaimed as one of the best new restaurants in the country by Esquire magazine.

In 2007, Fabrizio and Ingrid moved permanently to Naples seeking a location for their next restaurant.  Sea Salt opened in November 2008 and won Esquire’s “Best New Restaurant.”  In 2012, Chef Aielli launched Barbatella, a spirited Italian trattoria. After establishing both restaurants in the culinary landscape of Naples, the Aielli Group decided to open Dorona, a modern Italian Steakhouse, in 2018. The Culinary & Hospitality Education Foundation announced Chef Fabrizio as honoree of the year 2018 for his “Venetian World” cuisine.