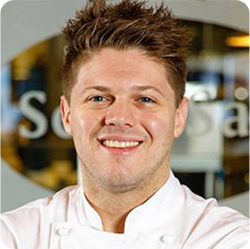 Joshua Zeman cumulates over 15 years of culinary experience. Since January 2015, he holds the position of Executive Chef at Sea Salt Restaurant in Naples, FL under the guidance of Chef/Propietor Fabrizio Aielli.

Between 2003 and 2004, Chef Zeman completed an internship at Brass Pelican Restaurant at the Registry Hotel in Naples. He quickly worked his way up through some prestigious establishments, notably as an Executive Sous Chef at Chops City Grill in Bonita Springs, FL, where he learned to master his plating techniques.  He deepened his knowledge of the culinary culture associated with the various wine regions during his four years at CRU Restaurant in Ft. Myers, FL, as Chef de Cuisine.  Chef Zeman became Executive Chef at Mereday’s Fine Dining at Naples Bay Resort where he perfected avant-garde cuisine techniques from 2013 to 2014.  For the last five years, he has been leading his team towards offering a new and audacious culinary experience at Sea Salt Restaurant, in Naples.

During his tenure at Sea Salt Restaurant, he has also coordinated events with renowned chefs locally and around the world. Chef Zeman holds a diploma from Le Cordon Bleu Institute of Culinary Arts, in Pittsburgh, from 2003.